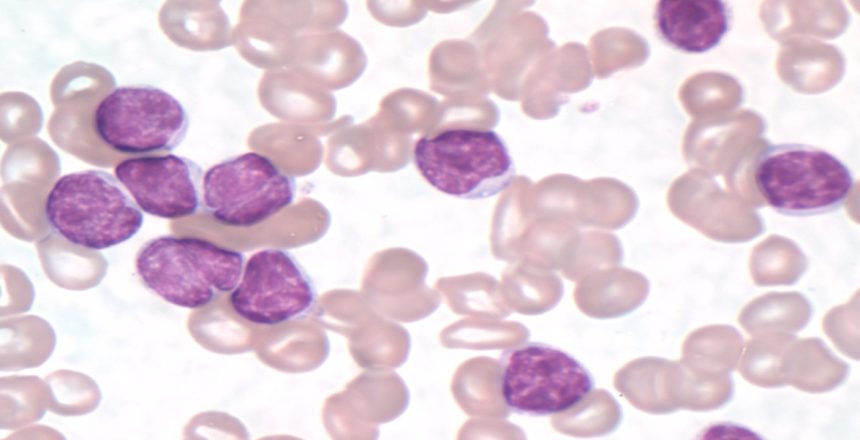 Dr. Albitar’s molecular work is presented at the ASH meeting in oral and poster presentations

Eltrombopag (EPAG), a thrombopoietin receptor agonist, has been shown to improve hematopoiesis in patients with aplastic anemia (AA), but in MDS patients the effect of thrombopoietin mimetics in bone marrow function is still unclear. In this phase-2 dose escalation study, we investigated the safety and effectiveness of EPAG treatment in low to intermediate-2 risk MDS patients (NCT 00961064).

Thirty patients were enrolled from March 2011 to July 2017. Preceding enrollment the majority of patients were either diagnosed with AA (n=13) or hypoplastic MDS (n=5). EPAG was started at 50 mg/day, up to a maximal dose of 150 mg/day, increasing the dose by 25mg every 2 weeks. The primary endpoint was hematologic response at 16 or 20 weeks, defined as either: (1) an increase in platelet counts ≥20.000/uL or transfusion independence for a minimum of 8 weeks; (2) hemoglobin (Hb) increase of ≥1.5g/dL from baseline, or a reduction in red blood cells (RBC) transfusion of at least 50%; or (3) an increase in absolute neutrophil counts (ANC) of ≥0.5×109/L or by at least 100% in patients with a baseline ANC <0.5×109/L. Responding patients could continue EPAG treatment on an extension arm.

The primary endpoint of hematological response was met in 14/30 patients (47%). All responders continued EPAG on the extension arm. In 3 patients, peripheral blood cell counts declined on EPAG after the initial response. One patient withdrew from the study. Ten of the 14 responding patients achieved a robust response (RR) after a median treatment duration of 15 months (range 7-27 months). Robust response was defined as stable hematopoiesis with at least a hemoglobin >10g/dl, and thrombocytes >50.000/L, and ANC>1000/L. However, peripheral blood cell counts significantly declined in 5/10 RR and EPAG was restarted per protocol. In 4 of these patients, peripheral blood cell counts recovered. One patient did not achieve a second response. 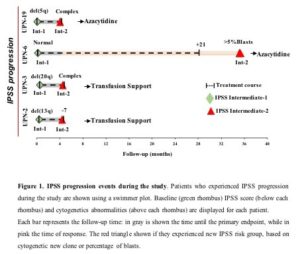 Based on International Prognostic Score System (IPSS), 4/30 (13%) patients progressed on study, including 3 non-responders and 1 responder, at a median follow-up of 4 months (3-35 months). The responding patient was diagnosed with increased bone marrow myeloblast 7 months after discontinuation of EPAG for robust response and 35 months after enrolling in the study. New cytogenetic abnormalities determined progression in non-responding patients (Figure).

Novel dose-limiting toxicities were not observed. Three patients developed CTCAE grade III hepatic toxicities. One of them discontinued EPAG at 3 months. Elevated transaminases returned to baseline after EPAG discontinuation in 2 patients. In both cases, EPAG was resumed either at the same (150mg/day) or reduced dose (50mg/day) level. There were no treatment-related death cases. One patient died on study before the primary endpoint from acute respiratory distress syndrome.

Sequential acquisition of genomic aberrations has been associated with malignant transformation. Targeting next-generation sequencing for somatic variants in genes previously associated with myeloid malignancies (Myeloid cancer genes, MCG) was performed in 29/30 patients with sufficient material (bone marrow mononuclear cells) available from baseline, primary endpoint, and at time of progression. At baseline, 22/29 (76%) patients were found with at least one mutation:TET2 (14.5%), ASXL1 (12.5%), SF3B1 (8.3%), SETBP1 (8.3%), ATM (8.3%), and ZRSR2 (8.3%). After EPAG, additional somatic variants in different genes were detected in 4/14 responders and 7/16 non-responders. Variants present at baseline were no longer detected in post EPAG samples from 4 responding and 6 non-responding patients. The VAF of variants detected at both time points were similar, indicating no selective expansion of clones with EPAG in neither responder, non-responder nor patients with progression based on IPSS.

In conclusion, our results suggest that EPAG is well-tolerated and effective in restoring hematopoiesis in patients with low to intermediate-2 risk MDS, particular with a prior history of hypoplastic bone marrow failure syndromes. EPAG was discontinued for robust response in the majority of responders but declining blood cell counts were observed in about 50% of them. Variants in MCG were more common at study entry compared to patients with aplastic anemia (Yoshizato, NEJM, 2015). However, EPAG appears not to selectively promote expansion of clones harboring MCGs in this patient population.